This monument for Susanna Maria (Frank) Kessler (1813-1890) features a tall column with a curtain with tassels draped over it. In the 19th century, drapes and curtains were placed over items in houses to signify that the house was in mourning. Curtains on a headstone can mean something similar or also symbolize the veil between Heaven and Earth. Susanna immigrated from Germany to the United States with her husband John Henry Kessler and son Phillip Louis Kessler. Upon immigration, she began using a more Americanized version of her name, Mary S. Kessler. According to her “Courier-Journal” obituary, “Mary S. Kessler… died at her home on the corner of Logan and Cain Streets. She was the oldest person living in Germantown, having resided there continuously for the past thirty-six years.” Census records and city directories corroborate the length of time the family lived in Germantown. They first lived on Milk Street, which was located between Shelby Street and Dandridge Avenue. Milk Street was renamed Oak Street in 1895 because it was essentially an eastern extension of Oak Street. Today, this area of town is the border of Shelby Park and Germantown. 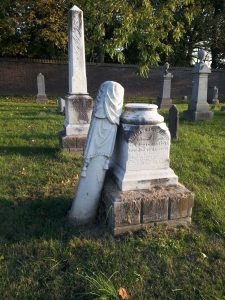