Posted on Sep. 9th, 2019 Comments Off on Susie (Zimmerman or Cain) Lewis

Susie (Zimmerman or Cain) Lewis (1924-1981) was born in Alabama on January 15, 1924. Susie married George Cotton on December 30, 1938 and the couple had two daughters: Susie and Jimmie. George and Susie divorced in 1953. Susie worked various jobs throughout her life as a kitchen worker, a laundress, and a maid at the Kentucky Hotel. There is not a lot of information on Susie’s early life. George and Susie’s marriage certificate lists her parents as Tobe Zimmerman and Malinda Cook. However, Susie’s obituary identifies her maiden name as Cain, which would make her parents Rufus Cain and Malinda Cook. Also, in the obituary of Rufus Cain’s wife Annie, Susie is noted as Annie’s step-daughter. Susie is not mentioned at all in Rufus’s obituary. This is an example of how public records can be inaccurate and terribly confusing. We do know Susie’s final resting place at Eastern Cemetery is alongside her second husband Guster Lewis. It is not clear when Guster and Susie started their lives together, but they called Shasta Trail in Newburg home until their deaths in 1976 and 1981 respectively. Image of Susie from Find A Grave user Denita (Cotton) Sims. 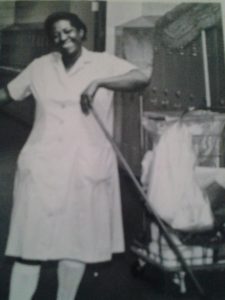 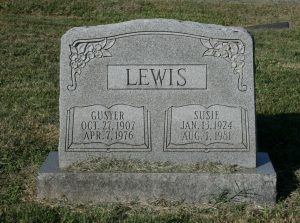