Posted on Sep. 9th, 2019 Comments Off on James R. Cunningham

James R. Cunningham (1853-1943) was the son of dance master/band leader James C. Cunningham. James R. Cunningham was steeped in music at an early age and could play 22 instruments. He was the founder of the Falls City Coronet Band, later known as the Falls City Brass Band. During his career, he toured Europe and had the distinction of performing for three American presidents: Rutherford B. Hayes, Ulysses S. Grant, and Grover Cleveland. Image is from “Courier-Journal” article from November 11, 1943. 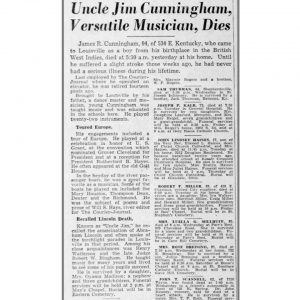